Quiche with Spinach and Gruyere

For a brunch on New Year’s Day, I decided to try my hand at quiche. That’s where this pie crust recipe came in handy. As did the scads of leftover food I had after my family visited for the holidays. I looked for a generic quiche recipe to follow, and found this one from Paula Deen. As you’ll see from my recipe below, I modified hers to accommodate the ingredients I had on hand.

This quiche came out fantastic, and was enjoyed by my friends on New Year’s Day, as well as by me for 3 subsequent breakfasts until it was gone. It’s a great and fairly simple recipe to make, easy enough to throw together and bake just in time for your guests to come. (Especially if you use a pre-made pie crust.)

When my family left after their holiday visit, I had a fridge full of opened-but-not-finished items – like milk, heavy cream, a tub of spinach, and cheese. It practically screamed quiche, so I answered the call.

Prep your pie crust according to directions on the recipe or the package, then preheat your oven to 375ºF.

Combine your eggs, cream, milk, salt and pepper in a food processor or blender. (I just whisked them in the old fashioned way.) 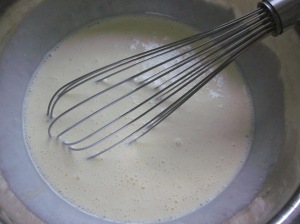 Layer your cheese and spinach at the bottom of the pie crust, then pour the egg mixture on top. I put all the cheese at the bottom and the spinach over it, but I think it’d probably be smarter to mix them equally. Also, shredding the cheese would probably have made for more even melting, but you can see the pix below where I chopped it up. Then, pour your egg mixture over the spinach and cheese.

Bake for 35-45 minutes, or until the eggs feel set. They shouldn’t be all jiggly when you take it out. I kept mine in for the full 45, but I probably could have left it in another 5 or so minutes. It was a little jiggly, even once we cut into it. But it was DELICIOUS! And the crust was totally worth a little rolling pin frustration. Seriously.

This was great served warm, and eaten cold (or reheated) the following days. You could probably put any fillings into this that you wanted, but I’d say this is a pretty killer base recipe. I will certainly be making it again. Especially if you use a homemade crust, it’s maybe minutes’ worth of prep, and you can have a hot dish ready for guests in no time.

The amount of heavy cream and cheese alone will give this an evil rating of 3.5, but it’s only that low because I toned it down from the original 😉 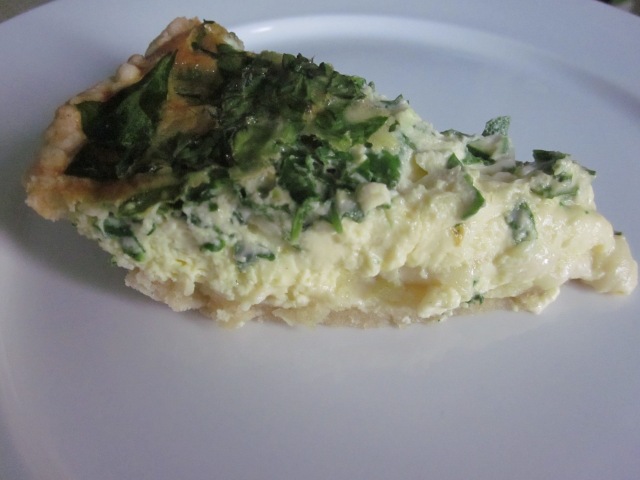