Look, let’s cut to the chase. This is a flour-less chocolate cake that got me an actual standing ovation when I made it last weekend. I’m posting it now so you have time to change all your Thanksgiving dessert plans and make this instead. I will be making it again myself on Thursday, of that you can be sure.

I’ve started getting recipes emailed to me from AllRecipes.com (no they’re not paying me, I’ve just found tons of awesome recipes on their site), and this one came in via email one day. I didn’t search for it or seek it out in any way, I know better than to make chocolate cakes in my house. (There’s one cake and one of me, the math should add up but it doesn’t.) So what better day to experiment than on a Sunday?

Here is the warning that it took me a couple of reads through to realize – this cake will take 2 days to make. Once it’s baked, you need to let it set in the fridge overnight. Okay? So you have to make it a day before you want to eat it. You still have plenty of time before dinner on Thursday, so don’t freak out.

It’s a fairly simple recipe with really minimal ingredients, only 7 – and 3 of those are chocolate, mostly stuff I already had on hand! That being said, this recipe is for a [Brand Name] Triple Chocolate Truffle Cake but I didn’t use [Brand Name] chocolate. I’ll let you tell me if it made a difference. (The people who ate it didn’t think so.)

This recipe called for the cake to be baked in a 9 x 2″ round cake pan. (9″ diameter, 2″ high) As it turns out, I do not own one of those, so I baked mine in an 8 x 3″ round cake pan. You could also use a 9″ square. This DID affect my bake time, so I will tell you the adjustments I made below – please refer to the original recipe if you’re using a 9 x 2″ pan.

Preheat your oven to 300F. Butter the bottom and sides of your cake tin, then line the bottom with parchment paper. The easiest way to do this is to trace the outside of your pan onto the parchment before cutting it. 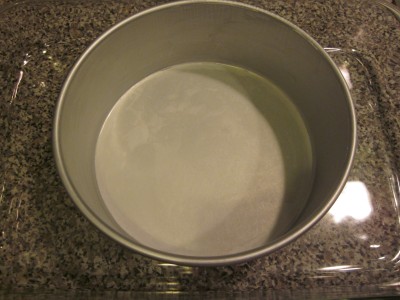 In a double boiler over barely simmering water, melt your butter and semisweet chips. I layered mine so there was half of the butter on the bottom (because it melts quicker) then chocolate, then the other half of the butter on top. Another tip is to make sure you cut your butter up so it melts more quickly – same thing with chocolate, the smaller the pieces the quicker they melt. Also make sure to keep the heat low so you don’t burn the chocolate. Once it’s smooth and melted, leave it to cool off slightly. (But not completely!)

While that’s going, you can start whipping your eggs. Into the bowl of a mixer, crack your eggs and add the salt. Whip them on medium speed until they double in volume, which takes about 5 minutes. (Set a timer so you don’t have to think about it.) It’s hard to tell volume in the pictures below, but you’ll see how the eggs  froth up after being whipped. 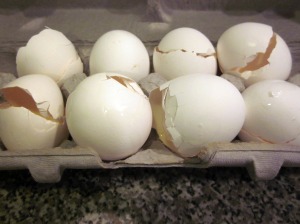 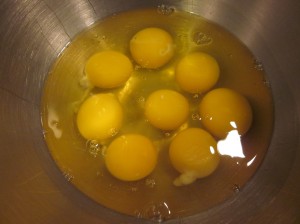 One thing I noticed was there were some un-frothed eggs still at the bottom of the mixer, and I’m not quite sure how to remedy that because I don’t think scraping the bowl will work. My cake turned out fine, so it shouldn’t be cause for alarm. Anyway, next you’ll add your egg mixture, one-third at a time, into your chocolate. Make sure to fold it gently. It took a while for me to feel like it was smoothly incorporated because I was trying so hard to be gentle. (The irony.) Once it’s combined, pour the batter into the prepared cake pan. Then rap (bang?) the pan on the counter to get out the air bubbles. You’ll see them surface and pop. 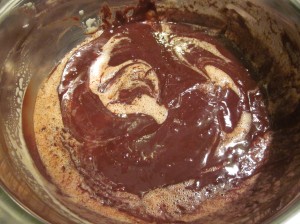 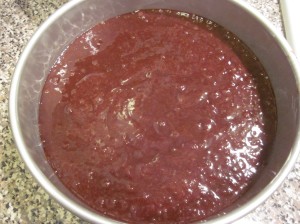 You’ll be baking the cake using a water bath. This means you’ll need a larger pan (I used a 9 x 13″ glass dish) as well. Place the cake tin inside the larger pan, and you’re going to fill it with hot-but-not-boiling water until it’s about halfway up the sides of the cake pan. *TIP* – it is much easier to add the water once your pan is on the oven rack rather than struggling with placing it down while it’s all heavy and splashy.

Bake for 35 minutes on 300F (remember I’m adjusting for using a smaller cake pan), and then turn up the temp to 325F for another 15 minutes or so until the cake is set in the middle and pulling away from the sides of the pan. You want to start the temperature off low so the outside of the cake doesn’t cook faster than the inside and get over-baked or tough. Once it’s mostly cooked through, you can speed up the process by raising the temp.

My cake did not appear to pull away from the sides of the pan, though I was trying to check while hot oven air was blowing in my eyes, so I did actually jiggle the pan to see if the middle was set. Just be sure to do this carefully as it’s sitting in water which can splash when displaced! I did also use a toothpick to test it and make sure the inside was cooked through once I pulled it from the oven.

When your cake is set, let it cool completely on a rack, but leave it in the pan. Once it’s cooled, you’ll be covering it with plastic wrap (the directions didn’t specify, so I put it on the surface of the cake, not just over the top of the pan), and putting it in the fridge overnight (for 8 hours – longer is fine). 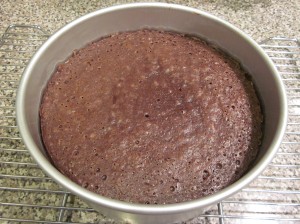 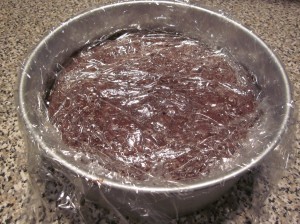 To remove the cake from its pan, place the pan about halfway in some lukewarm water. Run a thin spatula, or butter knife, around the edge of the cake and then turn it over onto your serving dish. Be careful that you wipe off any excess water from the pan before turning it over onto a plate so it doesn’t get on the to the cake. Then make sure to peel away the parchment paper. (The first pic below  is of the cake pan sitting in a plastic container with warm water – super hard to see in a white sink…) 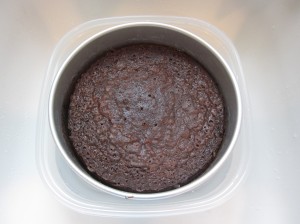 Pour your milk chocolate chips into a soup bowl, or any medium bowl that can handle heat. (Not the measuring cup that I used, very hard to stir…) Then, in a small saucepan, heat up your heavy cream. Once it’s hot, but not steaming, pour it over the chocolate chips. Let them sit for a bit, then use a spoon or spatula to smooth out the mixture. 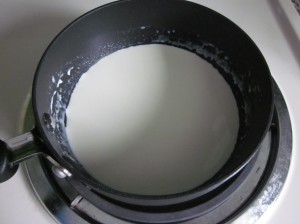 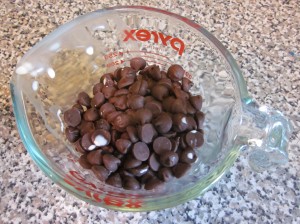 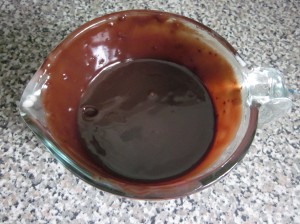 While it’s warm, pour the ganache over your cake, and smooth it out with a spatula. The original recipe says there will be some left over, but I just poured it all on and let it drip down the sides. While that’s cooling a bit, you can chop up or grate your white chocolate topping, then sprinkle it over the top of your cake. 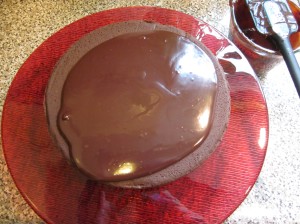 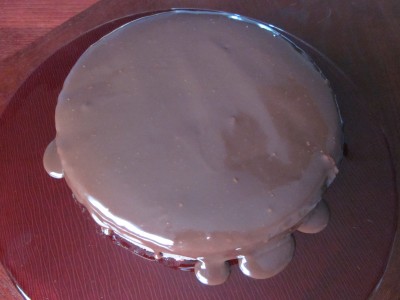 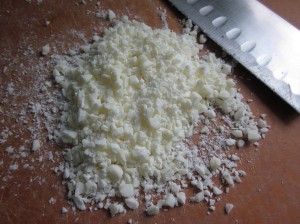 Place the cake in the fridge to set, then serve and enjoy! I couldn’t eat more than one slice because this is probably the richest dessert I’ve ever had, let alone made, but in a good way. This gets the highest rank on the Evil Rating Scale of a 5. No question.

Also, in case you’re wondering, I did take lots of pix of the whole cake, but they don’t look good since I also chose to use a red plate and my cherry wood table to display it. Silly girl. Anyways, it looked like a chocolate cake with white chocolate sprinkled on top. Here’s the part that matters… the first bite: 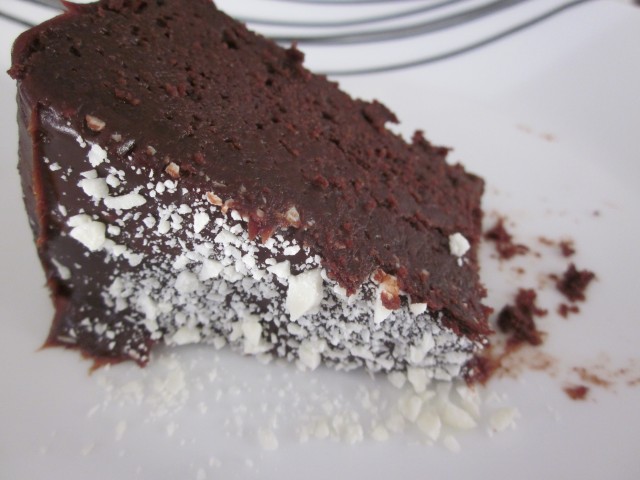 Update: I recently remade this cake, and got a new camera, so here’s a picture of the final masterpiece. This time instead of chopping the white chocolate, I used a veggie peeler to make curls.