Are you going to a barbecue or potluck this summer? Do you live someplace like Los Angeles where it’s too hot to even think about turning on your oven? Well Cool Whip Pie is definitely a recipe to keep on hand – you’ll memorize it after making it once – because it’s summery, light, and simple to make with only 4 ingredients. Oh, and did I mention there’s no baking involved whatsoever? You’ll need to plan ahead a little bit, as there’s some setting time, but even that can be sped up with the help of a freezer. And you can speed up the 6 hour refrigeration period by using your freezer instead.

I’ve made this pie twice recently and, with no oven to heat or ingredients to measure or multiple bowls and utensils to clean up, it’s by far one of the easiest things I’ve made in my kitchen. This recipe was a real life-saver this weekend when I couldn’t stomach the thought of actually making something, but knew I couldn’t turn up empty-handed to a house full of people.

I got this recipe from my mother and, since I’ve never had it anywhere else, I will attribute it to her genius. A few times I bugged her for the recipe for “that cool whip pie you used to make” and she said there wasn’t much to it. I learned with most of my mom’s recipes, when I came asking for them, that they were pretty simple, used ingredients we already had in the house, and mostly came about by resourcefulness. I’d like to think I inherited at least a little bit of that from her, so when she mentioned yogurt and berries, I figured out the rest of the recipe on my own from memory. She doesn’t know where she got this from originally either, but I’m giving full credit to her. 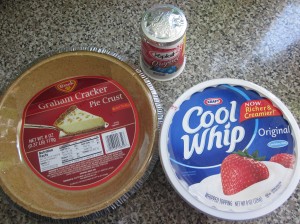 Empty your container of Cool Whip into a small or medium mixing bowl. (If it’s partially frozen, try to smush out some of the chunkier parts.) Add in your yogurt and mix the two together until smooth. As a side note, I used regular yogurt not Greek, so I’m not sure how the latter would work. If you give it a try, let me know!
Then add your fruit and fold it in as well. 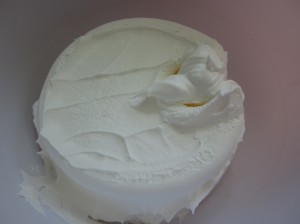 Pour the filling into your pie crust, spread it across evenly, garnish the top with some more fruit pieces if you like, cover it with a lid, and pop it into the fridge or freezer (depending on how much time you have until your party, or dinner, or afternoon snack). It needs 6 hours in the fridge, or about half that time in the freezer. You can’t skip on the chilling period entirely, however, because the pie needs to set so you can cut into it later. (Though if you are just going to eat it with a spoon straight from the tin, you probably can nix that step.) 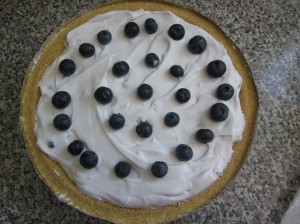 Seriously – I made 2 of these pies this weekend about an hour ahead of time, and just left them in the freezer until it was time to go! It really is that simple! The best part is, the back of the Cool Whip label had MORE no-bake recipes. I can tell I have a busy, no-bake-pie-filled summer ahead of me. I hope you do too 🙂