If you grew up with me, you would know that Rainbow Cookies are a must-have at any family event. (except Passover…) I believe they’re technically Italian cookies, marzipan layers with raspberry jam filling, topped with chocolate, and colored red, white, and green, but they’re a staple in any good kosher bakery as well. I found this recipe, and tried making these for the first time, a couple of years ago. It was a nightmare for me.

Recently, I got a request for these from a friend, and it just so happened to coincide with all the leftover red coloring from the Red Velvet Cupcakes I had made a few days prior. Armed this time with more experience, I figured they’d be a breeze the second time around. I was partly right. Good news: I didn’t run into the same problems I had last time like super sticky dough that wouldn’t spread. Bad news – ran into a new set of problems, including losing the entire green layer. More good news: I have mastered improvisational baking skills and instead ended up with a more fitting pink and white layered marzipan cookie. (I believe Stewie Griffin would refer to this as a compliment sandwich – masking one bad thing, or criticism, in between 2 good things. The name works better with insulting people, I guess…)

This whole post is going to be a do what I say, not what I did kind of deal. If you’re planning to make these, read ALL THE DIRECTIONS before you get started. I’m horrified how many details I’m still noticing I neglected upon making these. Save your sanity!

And so you have it, the whole story… but now for the part you really want – the recipe!

Start off by greasing three 13×9″ pans. Line the bottoms of each with wax paper, leaving some overhang, and grease the paper. You can preheat the oven to 350ºF, but I found the prep took longer than expected, so you can hold off for a bit. I’ll warn you again later on. 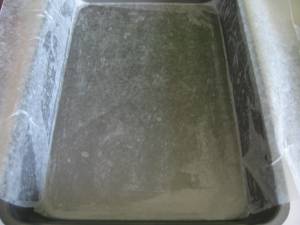 Break the marzipan into small pieces and grind in a food processor along with the sugar until you have something resembling fine sand. 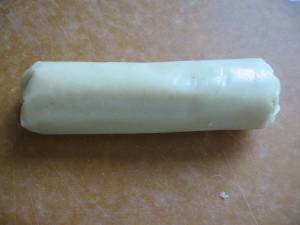 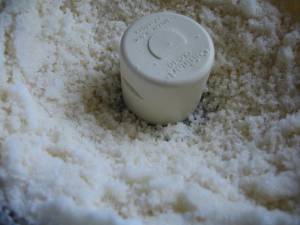 Pour the marzipan sugar into a mixer and add your 3 sticks of softened butter. 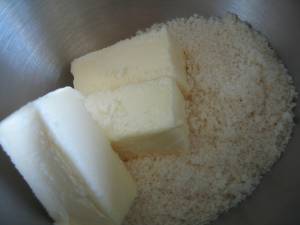 Beat until light and fluffy. While it’s going, separate your eggs. You’ll be beating the egg whites separately, so maybe separate them directly into the bowl you’ll be using. If you’re lucky enough to have 2 electric mixers, start beating your egg whites now – it’ll take about 7 minutes until they’re ready, you can set a timer. If not, you should probably start beating them now anyway. I’d say this is also a good time to preheat your oven to 350ºF if you haven’t done so already.

Once your butter and marzipan/sugar are nice and fluffy, add in your egg yolks and almond extract and beat well.

Then, with the mixer on low, beat in your flour and salt. 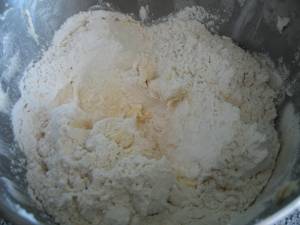 Hopefully your egg whites are ready, but if not, beat them now until they just hold stiff peaks.

Add 1/3 of the egg whites into the batter, and stir so they lighten it slightly. Then fold in the remaining egg whites. 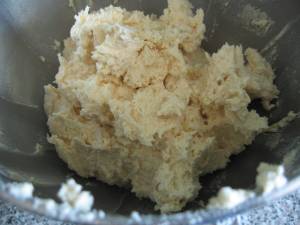 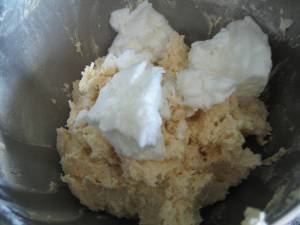 Divide your dough into thirds. I found this easiest by weighing the dough – it came to around 1200g so each bowl had about 400g in it. It’s also roughly a cup and a half for each portion. Color one bowl with the green coloring and one with the red. Leave the third part as is. You can add as much coloring as you like, the 6 drops are a suggested starting point.

Spread each color into its own pan. If you only have 2 pans, like I do, start off with the green layer, then the white. When you’re arranging the cookies you’ll start with the green on the bottom so you’ll want it done first. I’d recommend baking all the layers separately. Though I swapped shelves and rotated the pans front to back, somehow the green layer didn’t bake properly. Anyways, spread the batter as evenly as you can. 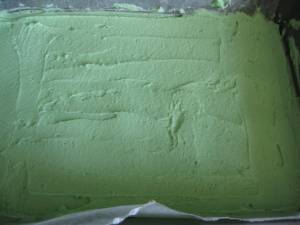 Bake each layer for 7-10 minutes. The edges should just be turning golden, and it says the layer should be set. There’s no real way to gauge this, unfortunately. Run a knife along the edges of the pan to loosen the layer. I’d also recommend lifting up the wax paper. You are supposed to invert the layers while still hot, directly from the pan. I’d recommend pulling the layer out with the paper, then inverting it onto another rack. The layers are incredibly soft and prone to ripping, so you don’t really want to dump them from the height of 2″ from your pan. Really. Let the layers cool completely. 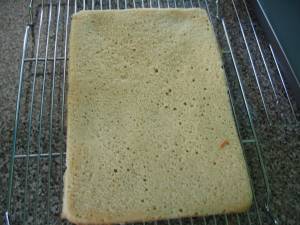 Since I was now left with only 2 layers for a 3 layer cookie, I had to improvise. I decided to make a 4-layer cookie, alternating the pink with the white. (Valentine’s appropriate, no?) I ended up with half as many cookies, but it was better than tossing the whole lot. (Not only is it a pain to break this recipe into thirds to recreate one layer, but I was out of marzipan.)

If you have 3 layers, celebrate! On a long piece of plastic wrap laid over a jelly roll pan (shallow but long baking pan), place your green layer down first. Cover it with half of the raspberry jam.

Place the white layer on top, then spread the other half of the jam on it before placing down the pink layer. (I did pink first, topped with white, cut them in half and layered them again with more jam.)

As I did things a bit backwards, and I only have pictures of my cookies, I apologize if this is confusing. You should have 3 layers separated by raspberry jam – pink, white, green from top to bottom. If this is correct, cut off the jagged edges so you have a smooth rectangle. (Use a sharp knife, not a serrated one)

Cover your cookie tightly with plastic wrap. Then, using a heavy object like a cutting board, cover the top of your layers. You want something weighing it down so it flattens and the layers stay adhered. I don’t have a picture of it, but I used a heavy, wooden cutting board over the top.

Place the whole tray, including topper, into the fridge and let chill for at least 3 hours. When time is up, start melting your semisweet chocolate in a double boiler – legit or makeshift. (I always use a metal bowl placed over barely simmering water.) I recommend Baker’s chocolate for this because I find pre-made chips don’t melt as smoothly. (Also I halved the amount of chocolate I used since I didn’t have a full sized cookie…) 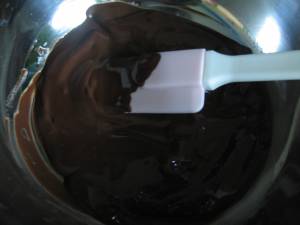 Pour the chocolate over the top (the pink layer) of your cookie, and spread evenly with a spatula. 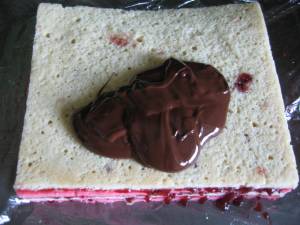 Now, let the bars sit at room temperature until the chocolate is set before cutting them into squares or diamonds. Did you read what I just wrote? Don’t do what I did and put them into the fridge to set. The chocolate will harden and everything will get smushed when you try to cut into them. Please, as I warned you above, learn from my mistakes.

Anyways, cut and serve! I would try for 7 across, 5 down. These aren’t meant to be large like brownies. Maybe somewhere around a 1.5″ square?

No matter that mine came out looking differently than I’d planned, there’s no denying that flavor was spot on, and the great news about baking mistakes is that you can eat the evidence 🙂

I hope that you try this recipe. It’s not as complicated as my description would have it seem, but it was a bit time consuming. However, as anyone who tried them could attest, it was totally worth it. These have an evil rating of 4 because of the time and energy it took to make them, as well as the chocolate/almond/raspberry footprint in my belly.