Although my recent “Earthquake Party” was more themed towards Easter than Passover, I really did want to incorporate some kosher treats into the mix. (Earthquake Party, you ask? There was a 7.2 Earthquake in Baja during the time of my little get-together, and it certainly made for a conversation starter… or ender, depending on what time you asked me.) And what dessert do I more associate with Passover than anything else? Macaroons! I love them. I know they’re around all year long, but I usually overlook them until Passover. No bother, I found a recipe and went for it.

These were pretty easy to make, just 3 ingredients, though truthfully I wish I had some pictures to follow. I guessed on some stuff, like how to make “haystacks,” so hopefully my photo account makes it easier for you. They came out fine, so I guess I was on the right track!

Proper credit for this goes to my friend Bunny who got this recipe from a recent baking class. I just doubled it and voila.

Preheat the oven to 375ºF, and line a couple of baking sheets with parchment. I think I ended up using 3 sheets.

Then, beat the egg whites until they are foamy and start to form peaks, higher but not highest speed. This will take about 7 minutes. I literally set a timer and left the mixer running.

Stir in the sugar, and then add in the coconut. It really doesn’t look like anything but a bowl of coconut.

Now, there are probably better ways to do this and I am just not privy to them. A cookie scoop would have been a good idea, or even some idea of the consistency of these before they’re baked. Keep in mind all that’s holding these together is a little bit of whipped egg whites when they fall apart as you try to place them on the sheet.

The method I found worked best was scooping up some of the coconut onto a small spoon, using my hand to pack it down into a somewhat tight mound, and then sliding the mound off the spoon onto the baking sheet. As you can see, there are plenty of extra flakes that didn’t stay packed in. My original plan was scooping onto the sheet and then forming the mounds – that did not work at all. This stuff is pretty sticky, so you’ll want as little contact with your fingers as you can manage. 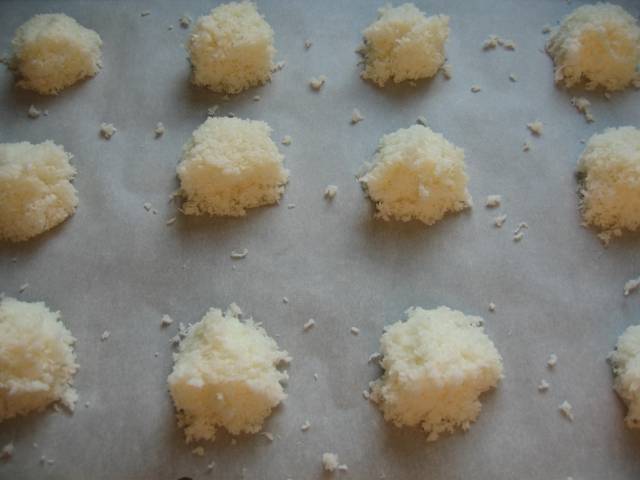 One recipe said bake for 15-20 minutes, or until golden brown. I hit golden brown at 16 minutes, so I just stopped there. Leave them on the tray for about 10 minutes and then transfer them to a rack to cool completely.

See? Super easy. These were a little crunchy, which was odd because I’ve only ever had soft and chewy  macaroons, but they were no less delicious. Toasted coconut? Yes, please!

These barely register a 1 on the Evil Rating Scale because they’re just good – pure and simple – despite the amount of sugar in them. You could help its rating by dipping these in some melted chocolate once they’ve cooled. If I had my act together, and didn’t already make another chocolaty Passover treat, I would have. Enjoy!