I’ve been hearing about Hershey’s Perfectly Chocolate Cake forever (well, at least as long as I’ve been reading baking blogs), and I figured what better occasion to test out the recipe than my boss’s birthday? You know, Mr. “I want chocolate with chocolate on chocolate covered in chocolate.” I’d say this recipe delivered, especially since he told me that this is hands down the best thing I have ever made. Well, thank you 🙂

I kept mostly true to these recipes (I made both the cake and frosting), except that I didn’t use Hershey’s chocolate (and cut the sugar in the cake.) I’ve been hearing about this fancy-shmancy brand of chocolate called Valrhona, and had never heard of it until reading some other blogs, so when I came across it while food shopping I decided to pick some  up. I wanted to see if the hype (and extra money) were worth it. Now this cake and frosting were really great, just as moist and tasty as they promised, but honestly I’m sure they would have been just as good with any other brand (even Hershey’s, haha).

This cake was a cinch to make, but it became more difficult when I decided to make a couple of different mini-cakes as well as mini cupcakes. The batter is RIDICULOUSLY runny, thank you extra cup of boiling water, and it would have been much easier to pour it into 8 inch pans than spoon it out awkwardly into all those little cups. Yes, that’s how I did it. I’ve decided that for next time I’m going to destroy one of my spoons and bend it into an ‘L’ shape with the spoon part at the bottom. A ladle was too big for the cups, and the spoon was too awkward to dip down into the mixer bowl. Anyways, feel free to steal that idea because it will save you trouble.

Another note about these… they rose a LOT. I wasn’t expecting them to puff up so much. The mini cups were 2/3 full and they rose nicely to the top of the cups with a little dome, but the cakes seemed to puff up to twice their size. Next time I make mini cakes, I’ll fill it with less batter. Again, two evenly portioned 8″ cakes would have probably been less of a hassle.

So finally, the piece de resistance, the recipe! Again, this was adapted from Hershey’s Perfectly Chocolate Cake, but it’s not very different!

This recipe is super easy, like making a box mix (and to be perfectly honest I thought it tasted the same as a box mix- that and hot chocolate and chocolate pudding and brownies and your favorite memory all rolled into one.)

Preheat your oven to 350ºF. Grease and flour your baking pan. (I used one 6″ round pan, 2x 3″ spring-form pans, and made about 4 dozen mini cupcakes.)

In your mixer bowl, stir together your sugar, flour, cocoa, baking powder, baking soda, and salt. Then add all the wet ingredients except for the water – eggs, milk, oil, and vanilla. Beat on medium speed for about 2 minutes. Then stir in your boiling water.

See? Easy peasy, and it looks like pudding. Yummmm.

Using a ladle or something similar, spoon your batter into the prepared pans. Again, these rose a lot more than I thought they would, so I’d put a little less into the smaller size pans. I was able to tort each one in half and they were still sizeable layers.

I baked the 3″ cakes for 20 minutes, the 6″ one for about 23 minutes, and the mini cupcakes for about 13 minutes. A toothpick should come out clean. Refer to the original recipe (linked again here) for any other baking times.

Here are my mini spring-form ones:

I had to give them a mastectomy though, which led to my first successful cake torting experience! Yay me!

Here are all my finished cakes and cupcakes. They’re so small that it doesn’t look like as much food as it was.

I made those a day ahead so they could cool properly. Then, last night, I made the frosting. NOTE – Most people in their recipes said they multiplied the recipe by 1.5 or even 2, so I just went ahead and doubled it from the get-go. The recipe below is for the original amount. (I had a little bit of frosting leftover, but for filling the layers on those 3 mini cakes I’m glad I had the extra on hand.) 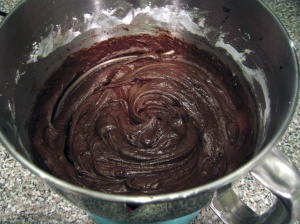 Melt the butter, stir in cocoa. Alternating between powdered sugar and milk, add to the melty mixture – beating to spreading consistency. Add additional milk if needed. Then stir in the vanilla.

The frosting wasn’t runny, but it wasn’t as firm as buttercream, which I normally use. I just popped the cakes in the fridge between layers and while working on the other ones so it wouldn’t just melt everywhere. It was great for piping small designs as you’ll see below!

The first pic is my mini cuppycakes, had to get those in the fridge quickly after frosting because the frosting got melty very quickly.

Then, a very dark picture of all my mini cakes (2 layers each.)

And a better shot (this morning) of the 6″ cake by itself.

This cake has an evil rating of 5 because it is pure chocolate and while some people had 5 (mini) cupcakes, others actually said that after watching their coworkers consume multiple ones, they didn’t want to even have one for fear they wouldn’t be able to control themselves and not have more. Our awesome receptionist said, “I have #5 in my brain, and it’s about to be in my mouth.” We all decided that about 4/5 mini cupcakes equals one regular sized ones. Use that conversion and you’ll be set. ENJOY!

Oh, and here’s an update… one of the photos of me from the birthday festivities. Yum, yum 🙂