One thing I’ve yearned to do is come up with my own recipe for cookies. I don’t have enough experience as a baker to do this fully, but I have picked up on a lot of substitution ideas by reading other baking blogs and comparing similar recipes. Now, it’s probably better to do a recipe in full before I go around tweaking it, but I was feeling adventurous when I decided to make these – so I kind of winged it.

I was on a real cream cheese kick after how well my cream cheese sugar cookies turned out, and since I was itching to put cream cheese in something else, I decided I’d try to adapt these Ultimate Double Chocolate Cookies as my own. I noticed that with the sugar cookies recipe, it called for one less egg than my standard one, and had the added cream cheese. I tried to use the same swap in these chocolate ones.

For variety, I split the dough and added Andes mint chips to one half and semi-sweet chocolate chips to another. I’d flirted with the idea of white chocolate to cut down on the dark since there was so much, but I figured I should just go with it.

Now, having made these… I probably didn’t need 3 eggs and I’m sure I also could have used even less melted chocolate and less cream cheese, but they came out wonderfully. I had insanely good reviews from everyone. (Phew!) So try this out as is, and you can adjust to taste next time.

Melt the chocolate over a double boiler or in a microwave (just the 6 ounces, not the chips.) While that’s going, sift together your dry ingredients in a bowl. In the mixer, cream the butter and sugars together. Add eggs one at a time, and then add vanilla and mix until blended. Then stir in the melted chocolate.

Add your dry ingredients, stirring until it comes together. (This is where my batter was still really liquidy. I know, duh, it’s mainly liquids. But it had me worried, so I added a little extra flour.) Then I split the dough into two bowls and added my chips to each one. Cover the bowl(s) and let stand on the counter for at least a half an hour so the chocolate can set.

After 35 or so minutes, my dough was still sticky and not easy to work with, so I put it in the fridge. I know I probably shouldn’t have done that because it’s got melted chocolate in it and will set weird. Guess what, did it anyway. Made scooping out the cookies much easier, and apparently didn’t affect the taste at all.

Line cookie sheets with parchment. Either drop a rounded tablespoon of dough onto the sheet, or roll up walnut sized balls. I always opt for the rolling if the dough’s not too sticky, I just enjoy it. Leave about 2 inches between the cookies. I made smaller cookies so I could get more of them, and they didn’t spread too much so I think I left less than the suggested 2″ between cookies.

Bake for 8-10 minutes. Let them cool for 10 minutes on the baking sheets before you put them onto racks. The cookies will set, but they will still be a bit soft since there’s so much chocolate fantasticness going on in there.

You can hardly tell from the picture, but these were the ones with the mint chips. Heavenly! 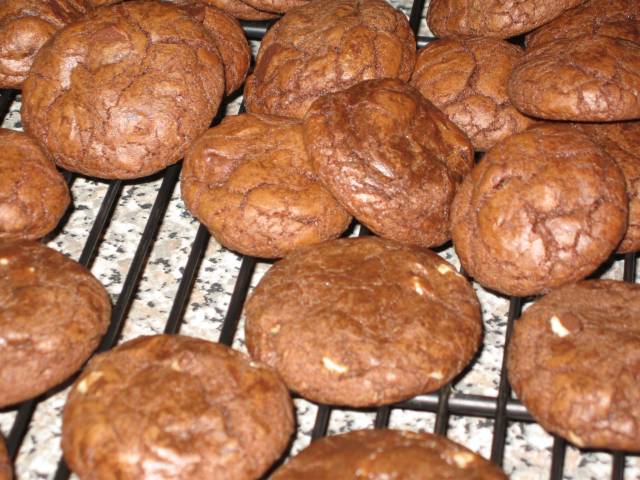 Let me know how these turn out, I was really excited about them. I’m sure you could add all kinds of fun things into them next time if you want to complement the chocolate flavor- nuts, dried fruit, the aforementioned white chocolate, coconut, peanutbutter chips… I am drooling. Time for a snack.

← Made for Each Other
Ginger, you spicy wench →